Nothing is Certain in Investing, Except These Things

There isn’t much we can say with certainty when it comes to investing.  Nobody knows what stocks will do tomorrow, let alone a year from now.  Same with interest rates, inflation, or any other factor that might move the markets.  Let’s peruse the headlines from last week, where a potential trade war apparently drove stocks:

So which is it?  Are trade war fears rising or easing?  Does it even matter?  Here’s the dirty little secret:  nobody knows!  There are no certainties in investing, except these:

1) Lower investment costs are better than higher investment costs. The less you pay in fund fees, sales loads, 12b-1 fees, trading commissions, bid/ask spreads, plan administration and record keeping fees, etc., the more money you have to compound over time.  Pretty simple and a mathematical certainty.  Checkout the growth of a $10,000 investment at different fee levels (0.2%, 1%, and 2%) over 25 years assuming a 7% annual return. 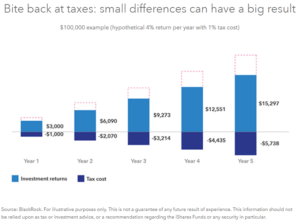 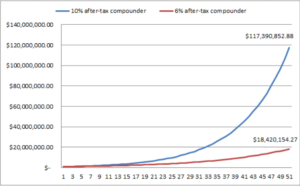 3) Diversification helps manage risk.  If you want greater certainty in returns (i.e. lower standard deviation), then don’t put all of your eggs in one basket.  Again, math.  The below chart of major asset class performance over the past twenty years drives home this point.  Good luck trying to pick the winners each year.  Diversify. 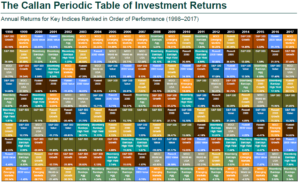 4) Passive management trumps active management over the long-run. This one has been beaten into the ground, but the data clearly shows the majority of active managers underperform and the ones who may outperform in any given year cannot sustain the skill (luck).  The first chart below measures the performance of active funds versus their passive counterparts.  The second shows that out of 563 active mutual funds that were in the top 25% of performance as of September 2015, less than 7% were able to stay in the top 25% for just three consecutive years.  That percentage drops to near zero after five years.  Think about that.  It’s a certainty that active manager performance will be uncertain. 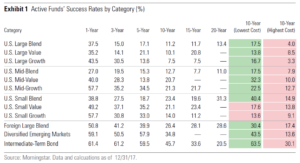 5) Investing brings out emotion.  “Trade war” headlines dominated last week because the financial media is really good at preying on investor emotions.  You may consider this as more opinion than fact, but most people I know experience feelings of happiness, fear, loss aversion, and greed.  Recognizing the negative role these emotions can play is perhaps the most critical factor to achieving investing success.  The below chart is based on analysis by Dalbar and portrays how poor-behaving investors (i.e. reacting to trade war headlines) underperform.  If you can control your emotions, it’s a near certainty your investment performance will be higher over the long-run.

I’d be remiss if I didn’t point out that ETFs tend to be lower cost and more tax efficient than mutual funds.  Most ETFs are also passively managed or index-based.  Like mutual funds, ETFs provide the ability to build diversified portfolios.  Oh, and ETFs offer daily transparency into holdings.  Mutual funds only disclose holdings on a quarterly basis (with up to a 60-day lag).  Investor behavior?  Well, ETFs allow for intraday trading, so the nod goes to mutual funds there – though, I would argue an investor who trades an ETF at 10am is just as likely to trade their mutual fund at 4pm.  Benjamin Graham once said “At heart, ‘uncertainty’ and ‘investing’ are synonyms.”  Therefore, your goal as an investor should be to create as much certainty as you can – and there are some easy places to start.