Can Investors and iShares Both Win with Lower Fees?

While ETF fee cuts are nothing new, iShares’ latest slashing of fees on several popular ETFs seemed to create more buzz than usual.  In one fell swoop, iShares reduced fees on eleven ETFs, saving investors over $51 million dollars annually.  Just.  Like.  That. 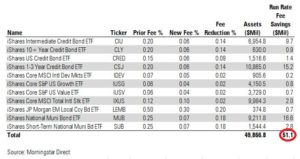 It makes sense why investors would be buzzing over $51 million in savings, but the fee reductions also had the investment industry buzzing.  When it comes to ETF providers battling it out over ETFs offering core portfolio exposure (dubbed “Core Wars”), fee reductions are usually measured in 1 or 2 basis points (.01 or .02%).  Instead, BlackRock’s iShares went straight for the jugular in several categories.  For example, they reduced the fee on the iShares National Muni Bond ETF (MUB) by 18 basis points, from .25% to .07%.  In other words, unsolicited, iShares chopped their fee 72%.  That undercut the competing Vanguard Tax-Exempt Bond ETF (VTEB) by 2 basis points and SPDR Nuveen Bloomberg Barclays Municipal Bond ETF (TFI) by 16 basis points.

BlackRock’s move has some in the industry asking why they would just hand investors $51 million, which comes right off BlackRock’s bottom line.  The answer, very simply, is BlackRock is playing the long game and the scale game. 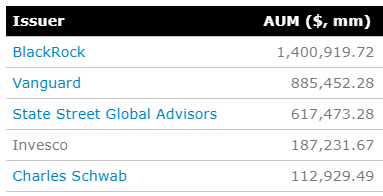 By BlackRock’s own projections, they expect global ETF assets to reach $12 trillion by 2023 and possibly $20 or $25 trillion by 2027.  Currently, ETF assets stand at nearly $5 trillion globally, of which BlackRock has 35-40% market share.  BlackRock’s goal is simple:  maintain or grow market share, while keeping internal costs in check.  If assets more than double over the next five years, guess what doesn’t double?  BlackRock’s expenses.  Martin Small, U.S. Head of iShares, recently appeared on Bloomberg’s Trillions podcast, where he explained:

“We will continue to reduce the costs of investing, but everybody has fixed costs at the end of the day.  Our fixed costs are much lower than many other peoples’ because of our scale and the breadth of our platform, our use of technology.  So we added 207 billion dollars of new assets in U.S. iShares last year.  I didn’t grow the expense line by that level either.  We have lots of scale to continue to grow our business, pass along savings to our clients and shareholders.”

How do you continue to scale and grow assets, while keeping internal costs in check?  Inside ETFs Chairman Matt Hougan:

Second, people do this because it works. It’s hard to think of a single fund that’s taken an aggressive approach to cutting fees without success. Recent examples that people pooh-poohed when they started: SSGA, Franklin, and GraniteShares. The strategy bats 1000%.

So, the largest ETF providers use scale and technology to reduce the costs of investing.  We already know investors are gravitating towards lower costs products.  U.S. ETF flows for the past 10 years broken down by fees: 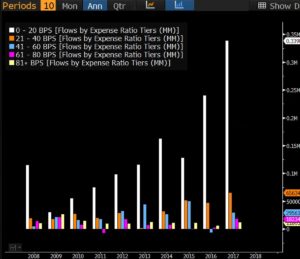 As investors pump more money into lower cost funds, that provides additional scale to ETF providers, along with the need to leverage new and better technologies.  And around and around we go.  Sure, there is a floor on how cheap ETF providers can offer products, but clearly, we’re not yet there if you consider iShares’ latest move.  What happens when we do arrive at that point?

Expect the ETF industry to look more like the airline industry or as Martin Small mentioned in the Trillions podcast, the cloud computing or cell phone industries:

“80% of the industry is starting to consolidate in like two to three players, which has been true for the last three, four, or five years.  But at the end of the day, our business is going to look more like cloud computing or cell phones in industry structure.”

The largest airlines, cloud computing companies, and cell phone carriers are doing just fine, thank you, from a profitability standpoint.  More importantly, the moats widen and barriers to entry grow larger.  Does anyone expect Delta Air Lines, Microsoft, or Verizon to go out of business any time soon?  iShares and the other large ETF providers are playing the long game and are more than happy to see investor assets consolidate among the top two or three providers.

There is one major difference that Martin points out, however:

“Unlike other industries where you have relative industry consolidation, the two biggest players are driving pricing down, not up.”