I recently chronicled the latest flare-up in the savage ETF fee war.  In the span of two weeks, we saw filings for the first “free” ETFs, the launch of the cheapest (for now) ETF, and meaningful fee moves from four of the top five ETF providers.  Then it happened.  Salt Financial decided to launch an ETF that PAYS YOU to own it.  Bloomberg captured the recent timeline of events in a nice, tidy chart.

Nice timeline of this most recent (and arguably the most violent) outbreak of the ETF Fee War via @mbarna6 h/t to @nategeraci for inspiration.. pic.twitter.com/KgWLasKdzG

As Eric points out, this may be the most violent fee outbreak ever – which is saying something given the carnage over the years.  As for this negative fee ETF, the Salt Low truBeta US Market ETF (LSLT) comes with a 0.29% management fee, but Salt is waiving that fee and then some.

There is a catch.  The fee waiver only applies on the first $100 million in assets or until April 2020 (after which, presumably, the waiver goes away).  Normally, consumers are thrilled to receive discounts on purchases.  Gyms offer free months of membership with the hope you’ll latch on as a longer-term client.  Internet providers offer introductory rates and send gift cards to get you to switch carriers.  Many people I know are more than happy to take those deals.  For whatever reason, this move by Salt Financial drew outrage from some corners of the investment world.  Words like gimmick, bait, and trick were bandied about.

Look, I’m not a big fan of fee waivers.  I worry some investors may not realize the waiver exists and pay unexpected fees down the road.  I’ve said previously the potential collateral damage in this ETF fee war is transparency.  Fund companies have to make money somewhere and there are only so many levers to pull.  Amid relentless fee pressure, they’re getting creative to survive.  Morningstar’s Ben Johnson explains the end result for investors:

“As the explicit, very transparent fees that we see and we pay for investment products go ever lower, either approach zero or hit zero, more and more of sort of the cost of being an investor is going into the dark and becoming less explicit and more implicit.”

I think it’s fair to say a fee waiver, even though it’s publicly available for everyone to see, does take us down the path of going into the dark – even if only a little.  Not every investor is going to look for or understand the waiver.

HOWEVER – friendly reminder – this ETF only costs 0.29% even without the waiver!  For context, the weighted-average fee for active stock mutual funds is 0.75%. Don’t get me started on annuities or hedge funds or private investment vehicles.  We’re talking 0.29% for an ETF that does this:

“A proprietary algorithm is used to calculate each stock’s truBeta score, or projected beta, for the next quarter, based on its historical long-, medium- and short-term performance, according to the prospectus, and machine learning is used to tweak the model going forward… While SLT narrows its selection universe to stocks with a truBeta score above 1.00, which represents the truBeta of the broad market, LSLT weeds out everything but stocks with scores below that level, and calculates beta variability scores for the remaining stocks. The methodology ultimately selecting the 100 securities with the lowest beta variability scores and equal-weights them, subject to certain diversification requirements.”

I’m not here to argue for or against this strategy, but I will go out on a limb and say this ETF is more rigorous and high conviction than a decent chunk of active (closet index) stock mutual funds out there charging significantly higher fees.  Where is the uproar over all the more expensive and less transparent investments?

The reaction to this “negative fee” ETF shows just how brutal the ETF fee war has been.  When some investors are arguing that an ETF with a 29 basis point fee (and offering an initial discount) is a sham, that’s saying something.

I’m not typically in the business of defending fund companies.  My priority is end investors.  But, somehow, we’ve lost sight of the fact that fund companies are for-profit businesses.  Smaller, upstart ETF issuers in particular have staked their personal livelihoods on attempting to deliver investors better outcomes.  If they decide to offer discounts in an attempt to attract customers (like many other for-profit businesses do all the time), why is that problem?  Salt Financial will probably make a little money off securities lending, but otherwise, they’re risking it all with the hope of raising assets quickly enough to support an ongoing business backed by an investment strategy they presumably have put blood, sweat, and tears into developing.

It’s extremely difficult for new ETFs to gain traction.  81% of ETFs that launched in 2018 ended the year with less than $50 million in assets. 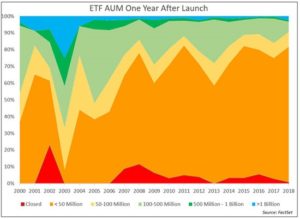 To stand out from the ETF crowd, where three providers control 80% of the assets, some fund companies must be creative to survive in the ETF Terrordome.  But it’s investors who ultimately decide an ETF’s fate.  Every ETF must stand on its own investment merit.  Period.  End of story.  The starting point for any investor should always be what’s right for their situation and portfolio.  High fee, low fee, negative fee, fee waivers – whatever.  Investors will be the judge.  It also doesn’t make sense to jump from ETF to ETF to save a basis point or two.  ETF.com’s Dave Nadig explains: 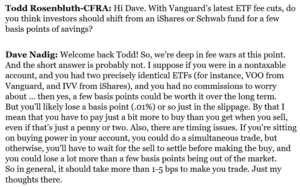 But let’s not lose the forest for the trees.  ETFs have driven down the costs of investing and added transparency.  If some investors are outraged over a rules-based, equally weighted ETF charging 0.29% (not to mention an initial discount), that should be Exhibit A as to how much progress the ETF industry has made.  29 BASIS POINTS!  Investors are winning, not losing.