My favorite ETF reads over the past week, along with my ETF chart of the week!

Is the Fed’s ETF Work Done? by Dave Nadig

“The Fed did exactly what it wanted to do here – buying just enough on the open market to convince the street that they would be the buyer of first and last resort, and bringing investors along for the ride.”

“91% of US-listed large-cap multifactor ETFs have underperformed the broad market in 2020, lagging by an average of 4.2%.”

How ‘JETS’ ETF Took Off by Drew Voros

“January and April, when the models first added the ETF and then increased the weight, have been the two biggest months for sustainable fund flows so far this year.”

Some Investors Tried to Win by Losing Less. They Lost Anyway. by Jason Zweig

ETF Chart of the Week:  As of the end of August, the Federal Reserve held 16 bond ETFs valued at approximately $8.7 billion dollars.  However, the Fed’s purchases represent less than 20% of all flows into bond ETFs since the bond-buying program was announced in late-March.  The below chart depicts investors aggressively “front-running” the Fed’s ETF-buying program, which actually didn’t get underway until mid-May.  It also shows investors riding the Fed’s coattails to near-record annual bond ETF flows. 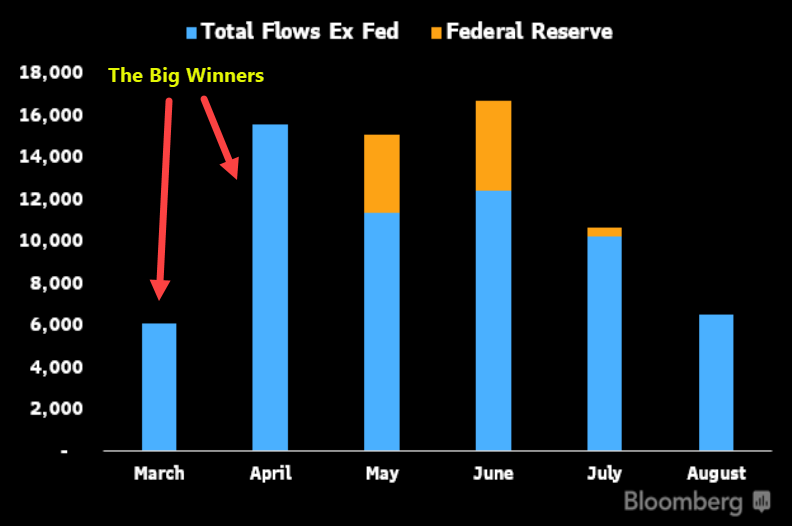