It’s Been 1,246 Days Since Vanguard’s Global ETF Had an Outflow by Katherine Greifeld

“It’s the poster child for the fact that Vanguard doesn’t have outflows. It’s relatively rare for their products – they’re not used for tactical purposes.”

“Goldman Sachs estimates the return of the S&P 500 would have been higher by 2 percentage points had Tesla been included all year.”

“The uncertainty hasn’t stopped Wood from posting some of the best numbers in the history of money management.”

“Investors should ask themselves, ‘if I’m paying more than this, what am I getting?'”

“Vanguard Group is on track to beat BlackRock Inc. in attracting ETF flows for the first time since 2013.”

ETF Tweet of the Week:  Concerns are growing over ARK ETFs’ increasing ownership of individual stocks, along with the firm’s ability to effectively deploy new investor cash.  ARK now owns > 10% of at least 15 different stocks across their ETF lineup.

Yea seems to becoming more problematic in some names. 15 different positions where they hold 10%+ of market cap pic.twitter.com/IEyga3HC9j

ETF Chart of the Week:  What else, but ARK Invest? The firm’s asset growth has gone parabolic. 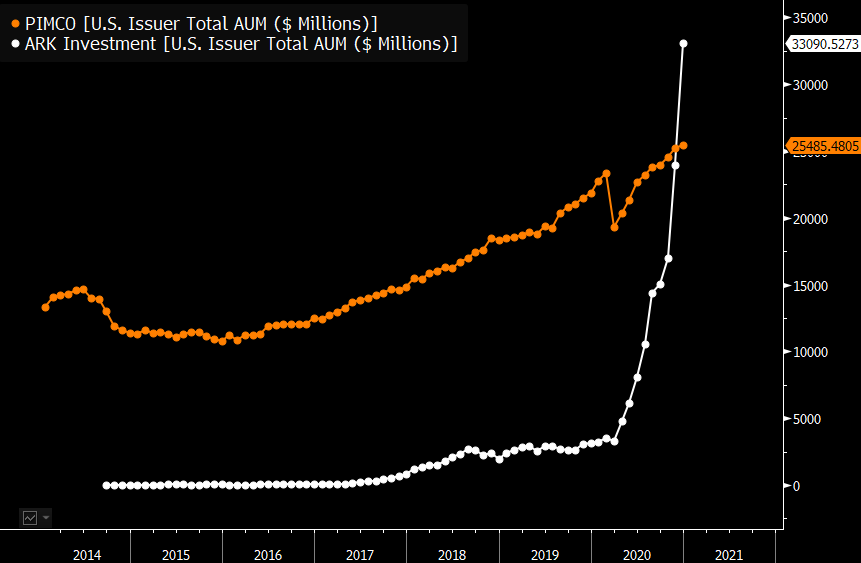