ETF Superpower In The Making by Ben Fulton

“Over 80% of ESG ETFs today have some exposure to fossil fuel users and producers.”

“Two-thirds of all ETFs have taken in fresh cash this year.”

Checking In On Vanguard’s Newest ETF by Jessica Ferringer

“Though it is new to the scene, the fund has already amassed over $1 billion.”

“There has been unprecedented demand for ETFs in the first half of 2021.”

Advisors to Asset Managers: Give Us What We Want, Not What You Want by Michael Thrasher

BlackRock Tweaked Some Models. It Triggered A Wave of Buying and Selling. by Dawn Lim

“A significant amount of assets going into certain ETFs today are driven by models.”

ETF Tweet of the Week:  House Speaker Nancy Pelosi made headlines this week after public filings showed her husband Paul executed several timely stock transactions.  Twitter, as always, had fun with the story… (As an aside, perhaps elected officials and their families shouldn’t be permitted to own individual stocks.  My solution?  ETFs.)

ETF Chart of the Week:  ETFs took in a staggering $465 billion in the first half of 2021.  State Street’s Matt Bartolini explains the magnitude:

“Over the past 12 months, flows into ETFs have averaged $63 billion a month. If that continues in July, ETFs could break the full-year record as early as next month. And if that pace continues for the rest of the year, full-year flows could approach $900 billion. As shown below, if the second half of 2021 were to be merely average, based on the prior five-year average of second half flow totals, flows would total more than $700 billion – a 40% increase above 2020’s number.” 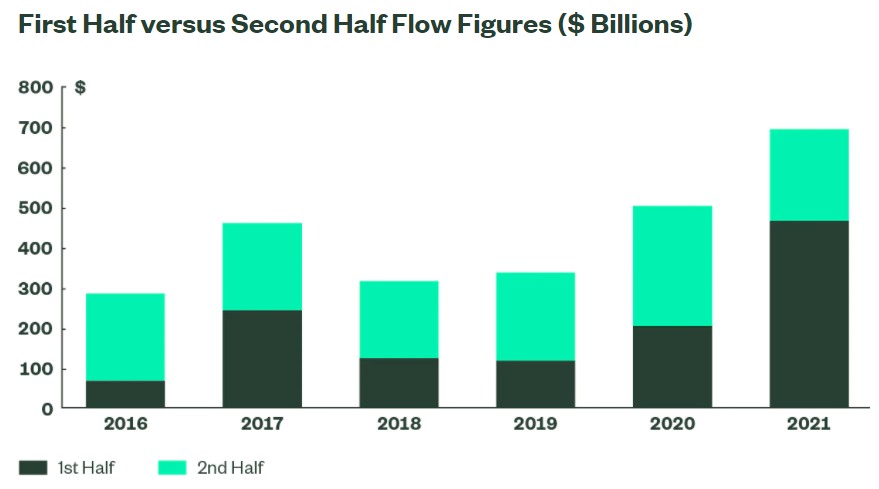