Consider Your Active Risk With Strategic-Beta Funds by Ryan Jackson

“To some degree or another, all strategic-beta funds are bets against the broad market.”

How The ETF Structure Will Save Active Management by Herbert Blank

“This is where the industry jargon calling the ETF structure ‘a mere wrapper’ is off-base. It modernizes a structural problem dating back to 1940.”

“This is kind of Ark’s version of ESG.  It’s intriguing because it doesn’t have a moralizing vibe to it.”

ETF Tweet of the Week:  It’s been a monster year for Vanguard ETFs, which are approaching $250 billion in net inflows – nearly double the next closest competitor (iShares).

Nice look at annual ETF flows by issuer via @tpsarofagis. Vanguard already has broken all time record w 4mo to go, closing in on a quarter of a trillion dollars. Alt title for chart: Welcome to the Terrordome pic.twitter.com/WPVMib9Mla

ETF Chart of the Week:  The SPDR S&P 500 ETF (SPY), the first US-listed ETF back in 1993, also became the first ETF to hit $400 billion in assets.  SPY currently represents nearly 6% of all ETF industry assets! 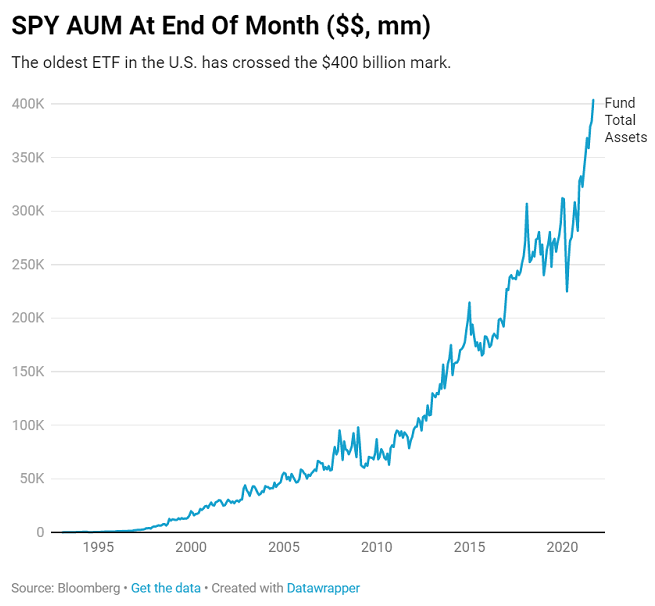