The Most Interesting New ETFs of 2021 by Dave Nadig

“All told, 461 new ETFs came to market in the 12 months prior to this article, while just over 100 closed, leading to the biggest open/close ratio I can recall in the past decade or so.”

These ETFs Generate The Most Revenue by Sumit Roy

“In fact, on the list of the biggest ETF cash cows for issuers, there are only a handful of funds that can be considered ultra-cheap, while there are many more that are downright pricey by ETF standards.”

ARK Innovation: An Object Lesson in How Not To Invest by Amy C. Arnott

“ARKK’s estimated 9.9% investor return over the past five years lagged its benchmark by about 8 percentage points per year.”

“This kind of public front-running is so heavily exploited it often actually backfires.”

Some ETFs mix investing with charities — should you? by Debbie Carlson

“Investors, however, should focus on the fund’s investment strategy first and the philanthropic goal second.”

ETF Tweet of the Week:  ETF fees continue quietly grinding lower.  The top three ETF issuers have all recently announced fee reductions, including this latest move from Vanguard.  After a record year of inflows, perhaps ETF issuers are in the giving spirit this holiday season…

JUST IN: Vanguard cuts fees on a bunch of ETFs and MFs. Notable a slew of FI ETFs are now 4bps and ESG is now 9bps (cheapest on Earth). pic.twitter.com/xFfBf49rcs

ETF Chart of the Week:  ETFs have vacuumed-up some $850 billion this year, while mutual funds are on track for less than $50 billion of inflows.  As Bloomberg’s Eric Balchunas notes, “ETFs will take in close to $1 trillion in the U.S. this year.  There’s no way that’s not on the mind of many mutual-fund CEOs”.  The chart tells the story… 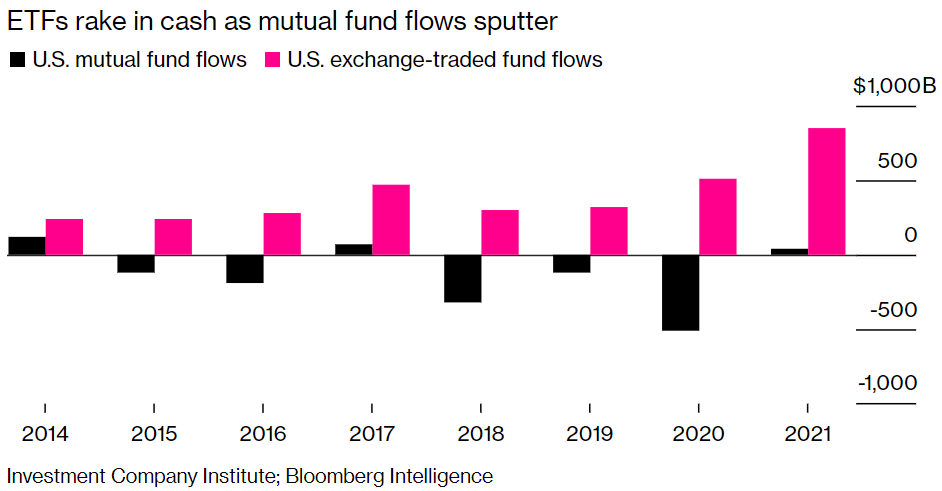