“A common assertion among ETF enthusiasts is that the product can lead pricing when an underlying market is locked or disrupted.”

“The audience is more limited than pre-Volmageddon, but growing again.”

“These can include leveraged and inverse exchange-traded products, volatility-linked ETPs, structured products, and defined outcome ETFs.”

“We heard from the advisor community that they want to be able to offer their clients an active ETF.”

iShares Just Slashed Fees: Here’s What You Need to Know by Elle Caruso

“AGG, the largest of the funds with $85 billion in assets under management, has reduced its expense ratio to three basis points from four basis points.”

“The pricing starts at 0.40%, which is significantly higher than the 0.03% charged by the broad-market Vanguard Total Stock Market ETF.”

ETF Tweet of the Week:  With news that Morgan Stanley is planning on launching ETFs, here’s a fun little history lesson…

So the circle is finally complete:

ETF Chart of the Week:  Speaking of Morgan Stanley, Bloomberg’s Eric Balchunas notes they are the first major wirehouse to join the ETF party.  Interestingly, wirehouses own some $800 billion in ETF assets.  The below chart offers a breakdown of the percentage of various ETF issuers’ assets held by wirehouses.  The takeaway?  Morgan Stanley will likely look to use their own ETFs instead, immediately boosting their industry presence at the expense of existing issuers. 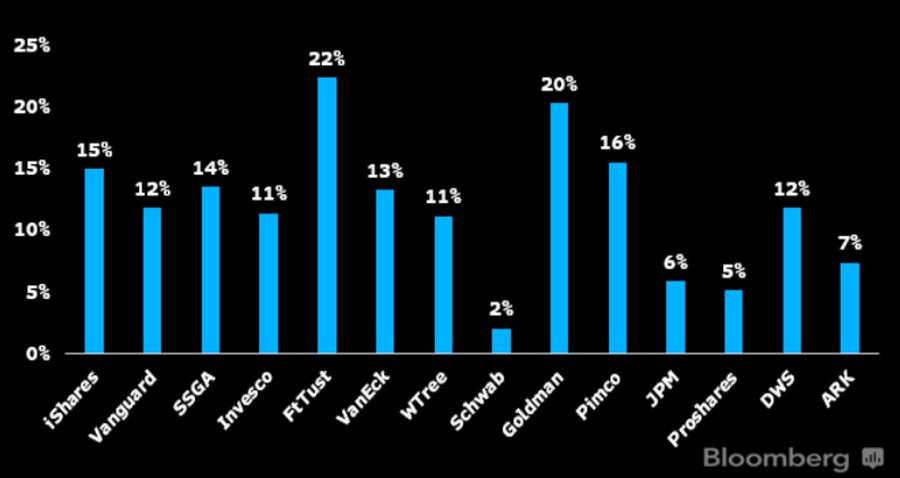