“I described single-stock ETFs as financial mutants that benefit nobody, but single-bond ETFs are a surprisingly good idea.”

“If the recent launches in the ETF space confuse you (what with multiple flavors of single-stock leveraged and inverse ETFs now dominating the daily blotter), then you’re not alone.”

“This will be an interesting experiment.”

“As retail investors adopt bond ETFs, Vanguard has benefited from that.”

Dimensional Fund Advisors, long the flagship of factor investing, struggles to chart a course as a nimble rival and big foot competitors cut into its market–and exploit its slow move to ETFs by Oisin Breen

“If DFA had a ‘do over’ they’d probably enter the ETF business a few years earlier.”

“We’ve long been saying the ETF is a better vehicle, a more efficient vehicle for active management.”

“In some ways, thematic ETFs are easier to grasp than sector ETFs.”

“One of the things that hit me in the last six months from my own experiences on Twitter is how much engagement I get from individual investors who want to engage with somebody like me, but they’re not necessarily looking for financial planning services.”

The recent market downturn temporarily put the kibosh on these types of launches, but now comes new ETF filings from Kevin Paffrath.  With 260,000 Twitter followers and 1.8 million YouTube subscribers, Kevin appears set to rekindle the trend of monetizing a social following by using ETFs.

New filing for a family of “Meet Kevin” ETFs which from a quick glance look to be actively mgd equity ETFs that look for innovative companies. The PM’s name is Kevin. pic.twitter.com/E6LXBNmLbK

ETF Chart of the Week:  Investors are growing a bit gun-shy at putting new money to work in ESG ETFs.  After two straight years of over $30 billion in inflows, only about $4 billion has flowed into the products so far in 2022.  I, for one, am not surprised… 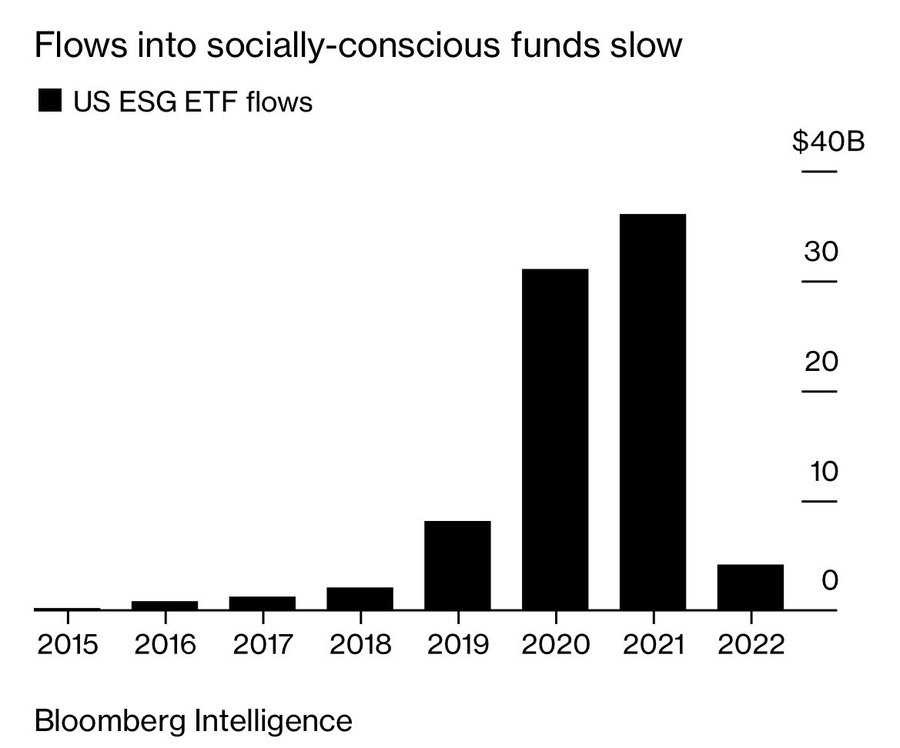