“As an average investor, don’t touch these things with a 10-foot pole.”

“The issuer may be trying to provide an alternative that improves price discovery during US trading hours or lowers the cost to investors.”

“The rule is really about, does the name and the prospectus reflect the holdings?”

“It could get worse for mutual fund investors this fall when mutual funds begin releasing information on capital gains dividends.”

“Wood and her team have kept to their theme of disruptive technology while managing ARKK.”

ETF Tweet of the Week:  When an ETF filing appears on the radar of Barstool Sports Founder Dave Portnoy, you know things are getting wacky.  REX Shares filed for 10 single stock ETFs last week, each offering inverse exposure to either a “meme” stock or another popular retail name.  These add to a rapidly-growing list of single stock ETF filings, including 65(!) by Tema yesterday.  Bloomberg’s Eric Balchunas notes there are now some 200 single stock ETFs currently in SEC registration and another 20 products already out in the wild.

A short $Penn etf? Can we figure out who owns Rex and does this mean we’re going to the moon? https://t.co/Vkjtw8HyP7

ETF Chart of the Week:  Morningstar’s Ben Johnson shows that nearly 260 ETFs have launched this year, more than twice the number of new mutual funds.  The first chart below shows the number of ETF and mutual fund launches by year.  The second chart highlights the ETF/mutual fund launch ratio, which will likely continue spiking – especially with the proliferation of single stock ETFs. 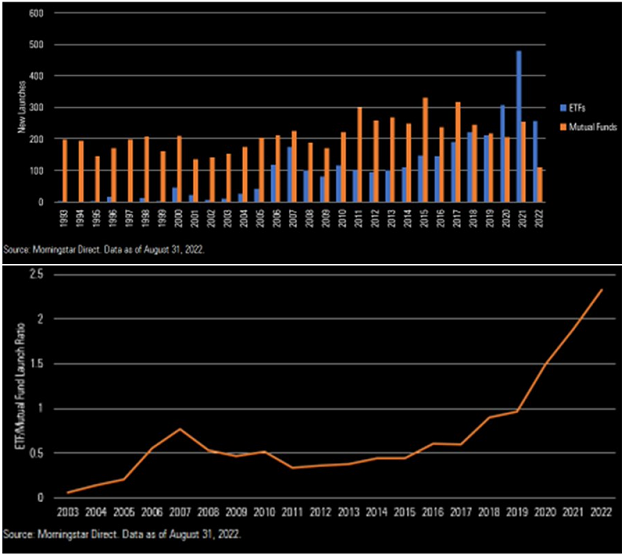